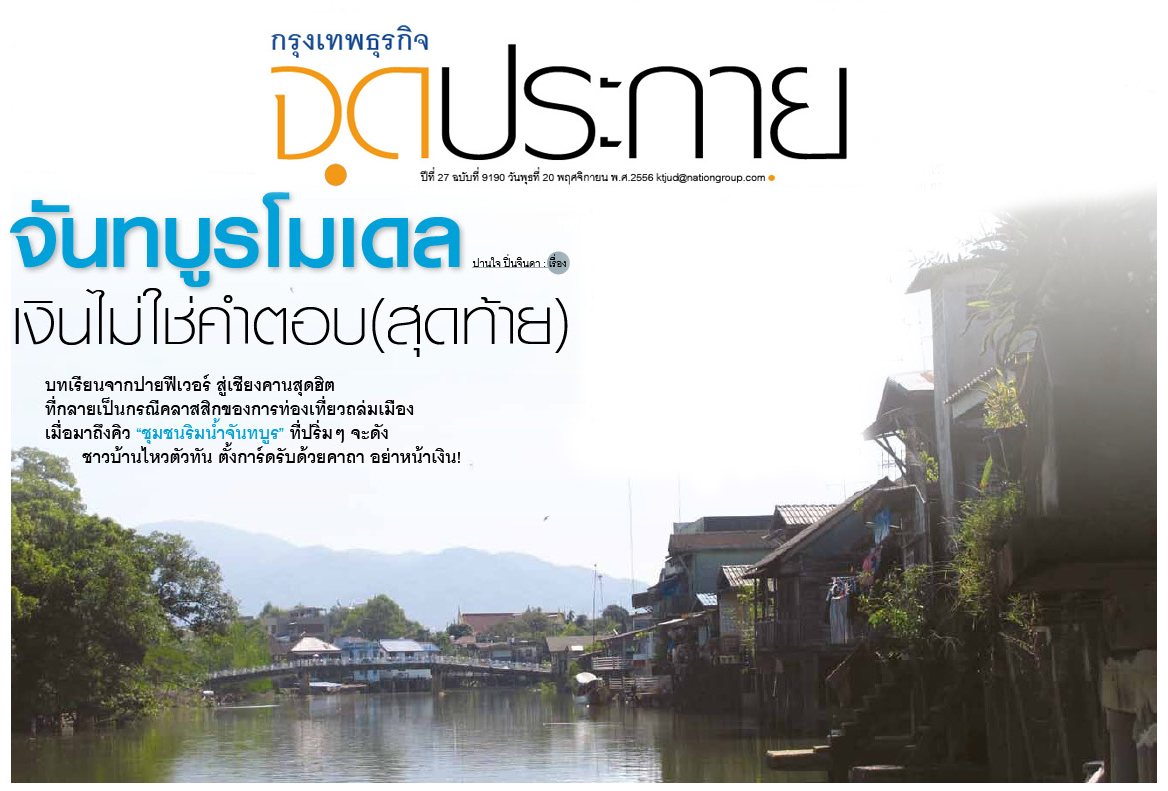 Money is not the (final) answer

The lesson learned from Pai Fever and Popular Chiangkarn has become a classic case study for town destructive tourism. Once the similar trend creeping to “Chantabun Riverside Community”, the locals have put their guard up to preserve their town with the magic word “Don’t focus on money!”

When 700,000 million Bath budget have been allocated for the tourism marketing plan, TAT expected to build up the value to “Thai travels Thailand” campaign in 2014. When the budget was about to drive the market as there was an declined numbers of western tourists coming to Thailand, the trend “Thai travels Thailand” has roamed in the small town like Pai, Mae Hong Son. Without proper management from the locals, wave of tourism has become chronic problems for them. Back in New Year celebration in 2009, the shortage of gasoline at petrol stations in Pai have left many tourists unable to return from their trip and the greedy sellers took advantage from the tourists by adding up the price of simple noodle to 70 Baht per bowl, making many tourists disappointed with the bad experience.

Later on, Chiangkarn in Loey was replaced in tourism market with similar selling point by exploiting with the low temperature and the river atmosphere, from Pai River to Khong River instead.
The unexpected boom overwhelmed Pai with massive invasion while shops in Chiangkarn were also affected from the troop of holiday makers roaming to town that they were unable to serve them. Some shops encountered food shortage while others were too tiring and just closed their shops because they did not want to disappoint the tourists with poor services.

However, the direction of tourism development is likely to unveil numbers of small communities in the waiting list which leads to the finding of solution for the balance between local culture and the tourism commercial.

Began from the thesis of Rattanin Suprutpanich and Praewporn Sukasatian, two students majoring in Architecture for community and environment, Arsomsilp Institute, who surveyed the area to build up participation and learning with the locals, the community has learned to take action to accomplish their own objective in 2009.

Meanwhile, the ministry of commerce required commercial office in each province to survey their area and find out “the commercial identity” of each town for development. Chantaburi commerce office selected “Chantabun Riverside Community” to transform this old area to become a new “cultural heritage area”.

Although this area was the commercial district, the business wouldn’t be able to grow. On the other hand, the remaining cultural heritage has more possibility to prosper therefore we have established here as the living museum”, said Prapapan Chatmalai, the president of Chantabun Riverside Community Development Association.

Once the association has established, the working day easily started up with cleaning up the place, growing plants, looking after the public area before beginning the serious discussion regarding the direction community will head to. The “culture led city” concept has returned to incorporate with “Social event for preservation and historic area regeneration” campaign which Thip Srisakulchairak and community architect team from Arsomsilp institute always dream of to find a right place for this model.

“This idea was born 3 years ago. Our students have a good relationship with the community which is important to this kind of project. We used this area as a leading model as there people who are ready to walk with us and to be responsible for their action. They realise what Arsomsilp would like to achieve, this is very important” Professor Thip, the head of social event campaign or later called Chantabun Rak Dee Co., Ltd. started to share the progress of the project which should be completed in the next 2 years.

Most people understand that the main mission of Arsomsilp is to regenerate the heritage site or old building by fixing and renovate, in fact, there is no better method to preserve architecture heritage than day-to-day maintenance.

Therefore, the collaboration between Arsomsilp and the community agreed to generate income from tourism in moderate level without opening the community for full commercial.

Arsomsilp has brought the sample models from overseas including the coin street development group in Southbank, London, UK which is the social enterprise and development trust. They have transformed abandoned community into the thriving residential and recreational neighbourhood with new residential, shops, gallery, restaurants, public park, riverside walkway, sport centre and organising events as well as establishing childcare and family provision and learning centre.

Tai-O Heritage on Hong Kong island is another development project established to promote and preserve cultural heritage and natural surroundings of the village which was implemented through the former police station since 1902. The police station was renovated as a hotel under the regeneration concept to build up cultural heritage preservation and development for community and tourism. Part of the hotel service is to give cultural tourism advice for tourists to realise the value of historic building and eco system with the aim to develop sustainable tourism for its guests and visitors.

Kawagoe in Saitama, Japan gains it name “Little Edo” from its surrounding and town atmosphere which remain similar to the proper period of edo era. The preservation group was established from the collaboration of the locals and government departments who have transformed the community and received awards. Finally, Kawagoe has become famous all over the world.

From Professor Thips point of view, these 3 model tourism cities exist with pride without surrender to money. The locals strive to preserve their town identity while operating as tourism destinations.

“People in Kawagoe always close their shops at 5 pm. They take their pride by respect their private time, the whole town is silent. They are not arrogant with tourists but they don’t want to lose their own identity. This is very good sign, they will be in the trend for a long time as they don’t become slaves for the tourists”

Ukrit Wongtongsalee, Chantabun local and the main leader of this project has also confirmed that “If we start with confidence and we are certain with good things we got, we don’t have to be scared of any other tourism trends as we are not prostitute”

The emergence of Chantabun Rak Dee Co., Ltd has supported the community to preserve lifestyle and cultural environment as well as to be the direct inherence of benefit as the community has operated the development by themselves. The 2 heritage homes were offered to the company with a very low rental rate, only 1 Baht per month so the community is able to proceed the project under the social enterprise for architectural preservation concept. The fundraising scheme was established to generate some capitals for renovation and manage Ban Khun Anusornsombat as the learning source of Chantabun Riverside while Ban Lunag Rajamaitri was renovated as a hotel in the form of museum resort.

“We set 8.8 million Bath allowance for the project from building renovation to business operation. We are open for the community in Chantaburi and the public who pursue the similar ideal to purchase the share which is 1,000 Bath each”

As the condition of the company requires the committees who are representatives of the community, the team did not expect much money from locals. However, the numbers of participants were relatively high although the capital from each person was not. The participation of the locals have encouraged the team to carry on as it reflects how much the community approve with the idea.

“We are glad to see people to take the share without monetary expectation. Although this kind of business does not generate loss, it does not gain much profit. If we got large sum of money with low numbers of shares, this project can hardly run to achieve. When this project is undertaken as a merit sharing as the locals understand, we are happy with that. However, there was one person coming to us and purchased 100 shares, 100,000 Baht. This is very good sign, this is the investment for community”

As Professor Thip mentioned, the establishment of Chantabun Rak Dee is unable to become a large enterprise as one part of profit will be a provident fund and the other will be provided for community development. Nevertheless, what the professor and the team expect to see is the prove of preservation that gets along well with how the locals earn income. One day, the rest of the community will realise that they have no need to sell their house for the investor to build a large hotel. They can have their own small business in the house they live for all their lives.

However, the community needs to realise about the good things they have, according to Ukrit. The community does not need to follow the tourism trends happening in other cities. Ukrit noted that tourists who expect to chill out in Chantabun and shop for chic souvenir or t shirt may be disappointed as there are not many shops open for this kind of business as much as other tourism destinations.

“Anyone can do the tourism marketing but we do not agree with the idea to take advantage of the culture to operate the business like bar to attract drinkers to get drunk. We will only have to show them the door” said Ukrit.